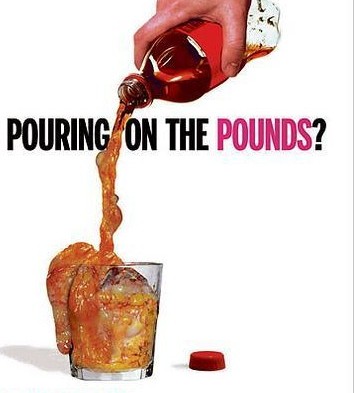 Last week the New York City Board of Health overwhelmingly voted to disallow the sale of sugar-sweetened beverages in containers larger than 16 ounces in restaurants, fast-food establishments, delis, movie theaters, sports stadiums, and food carts. Whether or not this new policy will make a dent in the city’s obesity stats remains to be seen, but it has most definitely stirred up an abundance of conversation about the government’s role in public health.

Personally, I’m a fan of the ban (surprise!). It’s not taking away anyone’s freedom to consume as much soda as they want, they just have to do it in steps now. Obesity is a real issue in this country not only for our health, but our pocketbooks as well. The Trust for America’s Health and the Robert Wood Johnson Foundation released a report today, F as in Fat: How Obesity Threatens America’s Future 2012, which forecasts 2030 adult obesity rates in each state and the likely resulting rise in obesity-related disease rates and health care costs. The annual cost of treating obesity related diseases in the USA is anticipated to increase by $48 billion to $66 billion by 2030. I would much rather we spend that money educating our children and improving quality of live in our neighborhoods, wouldn’t you? This is not just a freedom of choice issue; the horrendous health of our citizenry has real social and economic costs!

Naysayers also claim that the ban on super sized sugar drinks won’t change anyone’s behavior, so it’s not even worth trying. I think, again, they are wrong here. Even small steps towards health can add up to a big change overall. When I was watching the Weight of the Nation a few months ago, one of the interviewees said something that really stuck with me. She said that in a country where only 1/3 of the adult population can maintain a healthy weight, something is wrong. Personal choice and responsibly play very large into taking good care of your health and fitness. But so does the system. If the healthy option is the default, more people will choose it. Simple.

What do you think about all this? Nanny state in action or public policy with the public in mind?