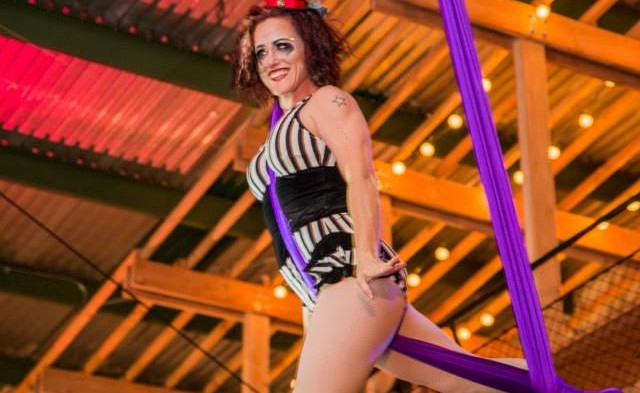 This is me and Amy’s “5 lbs of fat,” that she makes every client hold to get a sense of how heavy it is (it’s heavy)

I met Amy through a Living Social for her Boot Camp in late 2011. Newly back on the island after living on the mainland for over 2 decades, I needed a way to get back into shape since I wasn’t yet familiar with the triathlon crowd of Oahu. With my new fancy job keeping me busy, Amy graciously met me during my lunch breaks in Kapiolani Park, worked me out and and showed me that regardless of how much I claimed to be an endurance athlete, she could still kick my ass in only an hour!

I liked Amy immediately: She’s pushy in the right way, supportive in the best way, talented in the correct way, and irreverent in the refreshing way.

Once, while in the middle of training for the Honolulu Marathon, I relayed that I’d run a 5K during the weekend, and Amy’s dry response was, “Why?” I just KNEW she was the trainer for me.

Fast forward 2 years and after running a marathon, several half marathons and a triathlon or two, I started getting bored. So I began something completely different, Aerial Silks. Aerial Silks is also known as “aerial tissu” or “fabric” and is widely appreciated as a type of circus act in which a person performs acrobatics feats while on the silk.

I’ve never been so humbled by an athletic activity in all my life.

As an endurance athlete, I’m pretty confident I handle working out and going the distance. Not so with aerial. My first class was impossible and I was convinced it was a big racket (“One cannot POSSIBLY climb that piece of fabric!”). Daunted, I soldered on.

Aerial requires an incredible amount of upper body strength. Which, I did not have.

I asked Amy to design a workout (“for my GUNS,” I purred) that would increase my arm strength, help my flexibility and help me develop stamina.  After only a month of sessions twice a week, I was able to climb that impossible fabric and my splits were just a little wider.

I’m now one of her regular Boot Campers because I love how I’m done with my workout before my day has started and Amy is such a joy in the morning. Seriously, she’s downright PERKY at 5:30am! It’s almost totally annoying, but because she’s so into her job and making sure we all have good form and reach our goals, I tolerate her cheerfulness.

Amy really is one of the best personal trainers in Honolulu.

Want to see more photos like the one above? Check out Falling Up: Aerial Circus Kaka’ako from December 2014