Benefits of Boot Camp Before Breakfast

HomeBlogBenefits of Boot Camp Before Breakfast 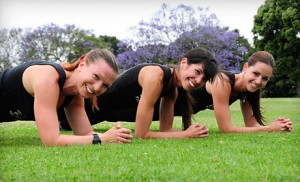 As my Boot Campers will attest, I’m a huge fan of the 5:30am workout. It gets the metabolism pumping, the endorphins activated and builds strength while you’re still sleepy

But, did you know that bootcamp before breakfast burns more fat?

Several studies prove that exercising in the morning, in a fasted state (before breakfast) triggers hormone changes in the body that not only force it to use fat for fuel, but also build more muscle, combat depression and increase quality of sleep.

According to Fitness Magazine, a woman participating in a typical Boot Camp type workout (weight lifting + cardio) can burn between 300-400 calories in one hour. It all has to do with two hormones and several large movements.

Growth Hormone (GH) and Testosterone both help the body create new muscle tissue.  One study showed that women who went 24 hours without food increased their GH production by 1300%! Additionally, testosterone has been shown to increase energy levels and fight depression.  Large exercise movements, such as squats or burpees trigger a surge in testosterone.

In short, doing large exercise movements, in the morning, on an empty stomach has been shown to burn fat, build more muscle and increase energy. Some studies show that people who regularly fast and workout, burn fat more efficiently at higher levels of intensity.

If you’re still interested, consider joining the next session of my Women’s Fitness Boot Camp.
1 hour workouts, lead by me, in lovely Manoa Valley, for 4 weeks at a time. I love seeing new faces. Contact me today.