I’ve been running in the Xterra trail runs at Kualoa Ranch for a few years now, but this year I decided to step it up and actually go for the full 21K course. One of the things I really like about this event, other than it’s drop dead gorgeous scenery, of course, is that there are several races offered, so it can be a great group outing, even if everyone isn’t up for a half marathon. In addition to the 21K, there are 10K, 5K, and the super adorable keiki sprint courses.

The day could not have been more beautiful or perfect for racing! We’ve been having some nasty Kona weather lately: the trade winds disappear and are replaced by muggy, voggy weather. November is also the beginning of the rainy season, but race morning was clear and cool, with a slight breeze. A very auspicious start!

The 21K course is quite challenging; a mix of single track and wide gravel paths, there is about 1700 ft of total elevation gain over the entire route! I’m familiar with the first part of the course in Ka’a’awa Valley, so I knew better than to expend too much energy climbing up the first three hills. My strategy for the entire race was to take it easy on the inclines so I could fly downhill and keep pace on the flat portions. It seemed to work pretty well. I was able to pass quite a few runners on the back section of the course, and I still had some energy left to speed up on the final mile. 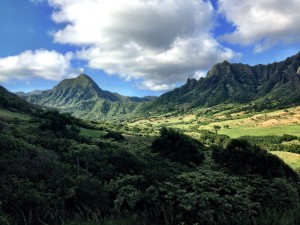 After climbing the side of Ka’a’awa Valley, the course cut across and down, looping back toward the ocean. The 10k course split from us at this point and went down to the staging area. I could hear the announcer at the finish line, and felt a twinge of regret that I was less than halfway done, but the ocean view that came up next calmed me a little.

The run through Hakipuu became progressively more challenging until we reached the highest point of the day: Pualoa Pass at 751 feet. It’s kind of the whole point of a trail run, but the terrain was TOUGH! I was also a little bummed that I had no real choice but to run through some stream crossings around mile 9. Finishing the race in wet socks caused several unpleasant blisters, which I usually avoid by properly fitting shoes. 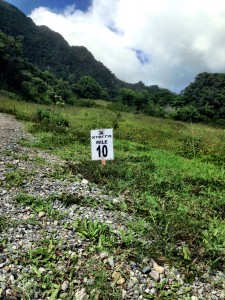 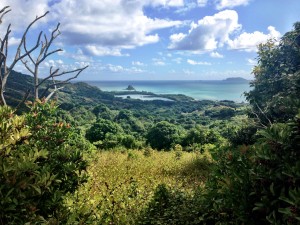 Here’s what I loved most about this race: